The National Hockey League approached VidOvation approximately 3 years ago seeking a more reliable way to officiate close-up action in a hockey goal.  They needed a system that used a reliable RF band, provided 720p high definition video, and was capable of withstanding the extreme environment of a professional hockey arena during a game.

When designing a wireless video system, there are many decisions to make including choosing which transmission technologies and frequencies to use.  While each transmission technology and frequency has its benefits, its critical to apply knowledgeable resources that understand the technology tradeoffs and can provide a detailed analysis to help you make the right choices that balance application needs with the available budget. The rest of this paper will discuss the most pressing tradeoffs that need to be made. 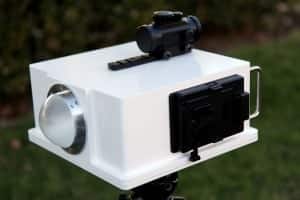 One of the first choices to make in setting up a wireless video network is the selection of the radio frequency (RF) and choosing whether to use a licensed or an unlicensed band of the RF spectrum.  The licensed spectrum by definition is regulated by governmental organizations that put in place rules to assign and limit the usage of those RF frequencies.  In general, the unlicensed spectrum is minimally regulated allowing more widespread “free” use which in turn generates broader adoption and the potential to be very congested.  While licensed frequency bands typically provide less congestion, the use of the available bandwidth can be limited and expensive to license.

The demand for higher bandwidth throughout the globe has greatly impacted wireless reliability. Many of the licensed and unlicensed frequencies available from 2 GHz to about 40 GHz are becoming highly utilized and, as a result, increasingly congested with traffic.  This can result in poor wireless video transmission and interruptions in service and reliability.

To help alleviate this problem government agencies around the world have released unlicensed spectrum in the millimeter wave frequency band for point-to-point communications.  Unlicensed frequency bands have been opened up globally at 60 GHz, 70/80 GHz and 90 GHz.  The transmission technology that utilizes these bands is highly directional and, though unlicensed, has minimal to no congestion.