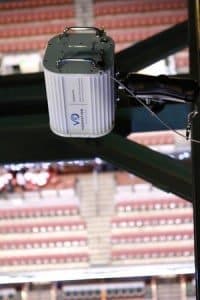 Transmitting video wirelessly over the 60 GHz spectrum can be an ideal solution for line of sight applications. Clearly, by definition, a wireless solution eliminates the need for cabling such as fiber or coax, which can be difficult or impossible to use in many instances. Additionally, other wireless frequencies come up short for two major reasons. First, lower frequency solutions like Wi-Fi do not have the bandwidth to transport uncompressed HD video, and would therefore need to compress the video at its source, transmit it across wirelessly, and then uncompressed the video at the receive end. This would both add latency and, much more importantly, reduce video quality, which is critical. Second, these lower frequency solutions in unlicensed bands are subject to a great deal of interference, which can adversely affect, and even shut down, a wireless video stream. This would clearly be unacceptable in many situations, and because of its unlicensed status, anyone with a Wi-Fi transmitter could, accidentally or maliciously, interfere with these transmissions.

While 60 GHz is also an unlicensed band, it differs from the lower unlicensed frequency in two significant ways. The first is in terms of sheer bandwidth. While Wi-Fi spectrum allocation at 2.4 GHz is roughly 85 MHz wide, the unlicensed bandwidth allocated to 60 GHz is 7 GHz wide – covering the entire band from 57-64 GHz in the US (and is the same or similar worldwide). This massive increase in bandwidth translates into much higher capacity channels that allow for the transmission of fully uncompressed high definition video at the standard rate of 1.485 Gbps. Therefore, there is no need to impact video quality or system latency by compressing the video stream. The other major difference from lower unlicensed frequencies is the directionality and very high spectral reuse capabilities at 60 GHz. As this implementation utilizes focused point-to-point antennas, it is nearly impossible to interfere with the signal, even in the highly unlikely case of someone actually having a functioning 60 GHz transmitter. This interfering signal would have to be in the direct path between the transmitter and the receiver, which for all practical purposes would be impossible if the units are positioned overhead.

Wireless 60GHz links are ideal for uncompressed HD SDI application. It is ideally suited for sports. This technology has been utilized by the National Hockey League for the In-Net GoalCam for goal camera verification and instant replay. Every game of the 2012 Stanley Cup Playoffs and Final utilized the VidOvation In-net GoalCam System. Other application include ENG, news, building-to-building links, church over-flow venues, college campuses, corporate conferencing, professional audiovisual just to name a few.