We would like to personally invite you to experience a limited demonstration of the future of wireless broadcast.

If you have an active 4K video project with a need for 4K wireless, click on the link below:

In 2017, ABonAir broke the lip sync barrier with our 7 msec sub-frame delay wireless broadcast products. HD broadcast will be in massive use for years to come, and broadcasters are demanding mobility and wireless capabilities.

Visitors to the VidOvation booth C6906 will be able to experience a demo of the AB512 7 msec HD Wireless Broadcast System. 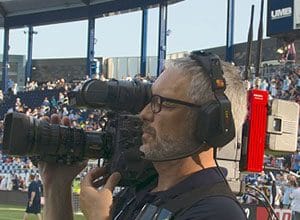 Do You Cover Broadcast Sports?

ABonAir’s customers come from all over the spectrum – sports, news gathering, live events, and religion. Sports broadcasters are often especially interested in cutting-edge broadcast technologies. If you broadcast live sports, drop by our booth at NAB 2018.

Finally, our NAB 2018 team is quickly booking demos. The only way to see our new 4K system is by booking a meeting – don’t wait!

We at ABonAir personally invite you to meet us at booth C1616 at NAB 2018. Click here to schedule a meeting and let me know what you are interested in – our 7 msec series or our 4K 7 msec series.

See you in Vegas!