Some implementations employ both ARQ and FEC technologies. Generally speaking these implementations are using the FEC to correct for transmission errors most of the time. Only when the FEC’s error correction capability is exhausted does the ARQ start to re-transmit lost IP packets.

More intelligent implementations using an ARQ and FEC Hybrid will reduce the FEC overhead when the ARQ is activated enabling the ARQ to use just the remaining bandwidth keeping the total consumed bandwidth constantly provisioned for the service. 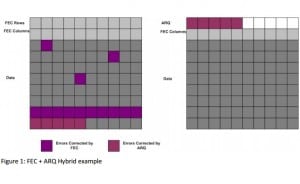 In this example, the ARQ packets are transmitted in the next FEC data block shown on the right side of figure 1. The FEC overhead has been reduced to allow the ARQ to retransmit without increasing the overall bandwidth. The FEC overhead is reduced by only transmitting FEC check sums for the FEC matrix columns, and the FEC Row check sum bandwidth is used for the retransmitted data packets.