Blatter Tweets: Football goal line replay a necessity – Why not use VidOvation GoalCam?

Last night’s missed goal during the Ukraine-England match may have caused heartache in the Ukraine but it also upset the Twitter Universe as Sepp Blatter, FIFA president, tweeted to the world that “GLT is no longer an alternative but a necessity.”  FIFA should consider a field proven solution such as the VidOvation In-net Goal Camera used successfully by the National Hockey League this season. 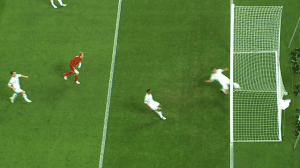 FIFA will decide on July 5 whether to approve the five-official system and either of the two goal-line technology systems currently being tested in England and Denmark.

Speaking at a media briefing in Warsaw on Monday, Platini said he expects goal-line technology to be approved at the IFAB meeting.

Goal line technology has also been the subject of some recent tests by the International Football Association Board.

And as expected, the world of pundits is already responding. Simon Rice of The Independentsides with Platini that goal line technology is a slippery slope to replays for offsides, red cards, etc.