As mentioned earlier, television production and broadcast engineers have always sought out the best technology for media events such as the Olympics. In the mid-1980s, fiber-optic transport was introduced into the television industry. Fiber optics are used in all aspects of production and distribution of video and audio signals. The state of the art for the transport of analog video is to use 12-bit video digital encoding. The serial digital bit rate can vary from about 144–300 Mbps.

With the introduction of digital video in the 1990s, fiber-optic transport continued to enjoy growth in the broadcast industry. Digital video was encoded into data rates ranging from 144–360 Mbps. These high bit rate video signals could only travel over copper up to about 300 meters. Transport distance beyond 300 meters with a coax required a repeater (which needs power) or a fiber optic system.

The transition to 100% DTV/HDTV has created a need to transport signals with a bit rate as high as 1.5 Gbps. HDTV using an SDI interface (HD-SDI), in its native or uncompressed form, is 1.485 Gbps. HD-SDI can better reach about 150 meters over a coax. Once again, fiber is the only choice to reach distances beyond 150 meters.

Systems can be designed using many of the technologies described above. Analog and digital signal transport can be mixed. Time-division and optical multiplexing can be combined.

A broadcast television station may typically reside in a downtown metropolitan area. The television transmitter and satellite up and down links may be on a distant mountaintop outside the city. This situation is a perfect application for fiber transport. The system may require both analog video and digital video since the station may be in the midst of its conversion from analog to digital broadcast. Signals in both directions will be required to support downlink satellite video.

Another typical application is that of back-haul feeds, where many channels of video and audio are trunked together over one fiber. Such a system can use TDM to combine groups of eight channels of video with audio into single wavelengths. The optical multi-plexing or CWDM technology is used to combine the wavelengths with groups of eight videos onto one fiber. The combined technique of TDM and CWDM provides a fiber transport capacity of more than 144 video channels on one fiber.

The quality and fidelity of an analog signal over long distances are difficult to maintain over copper. As signals increase in bandwidth and bit rate, it becomes more and more difficult for systems to transport these high bandwidth signals even a short distance over copper. This becomes very apparent when working with high-resolution video and graphics.

A computer-generating RGB-HV or UXGA signal at 1,600 × 1,200 pixels requires an analog bandwidth of close to 500 MHz. If the signal is digitized, it requires a data transport bit rate of 3–4 Gbps. There are many copper-based products that will transport these signals but at a cost in performance and video quality.

An example may be an airport terminal where arrival and departure information is displayed every 100 ft. This application requires a long daisy-chain of units that can drop and repeat the same signals to each monitor every 100 ft.

Systems are available with the drop-and-repeat or daisy-chain feature. As shown in Figure 6.10-14, one transmitter can send the video signal to the first receiver. The first receiver decodes the optical signal and generates an output for the local monitor. The receiver also repeats and regenerates the optical signal to send to the next receiver in the chain. This technique saves on installation and equipment costs. The alternative would be to run a fiber from each monitor back to the control room. Instead, one fiber can feed many monitors.

The same device can be used to replicate an optical signal. One optical signal can be replicated up to eight times with one device. Unlike the passive split were the optical output is diminished, the output optical signals are regenerated to full optical power.

The device can also be used as a mode converter or wavelength remapper. The device can be configured with a single-mode input and multimode outputs.

This gives the ability to convert from multimode to single mode or from one wavelength to another wavelength. The devise can convert optical signals to CWDM wavelengths.

Broadband cable television signals are traditionally transported over a hybrid system of fiber and coax. Hundreds of video sources are modulated onto individual carriers and combined into one broadband RF signal. These RF signals can have a frequency bandwidth of 48–870 MHz. This is an enormous bandwidth to transport strictly over coax. Cable systems are designed to transport the high bandwidth signals over fiber to each residential community. The last mile of distribution is then accomplished over coax for delivery to each home. Multiple line amplifiers are used to transport the high bandwidth signals over coax the last mile.

Another application is in a campus environment such as a corporation, university, or military base, where the buildings are spread over some distance. Many of these facilities have an internal cable television system. These facilities will receive a commercial cable TV signal from a local provider. They will strip out the channels of interest, such as news and educa- tional programming. They will then combine these channels with their own internal programming, such as human resource and training channels. The channels are then modulated and combined into one broadband RF signal. 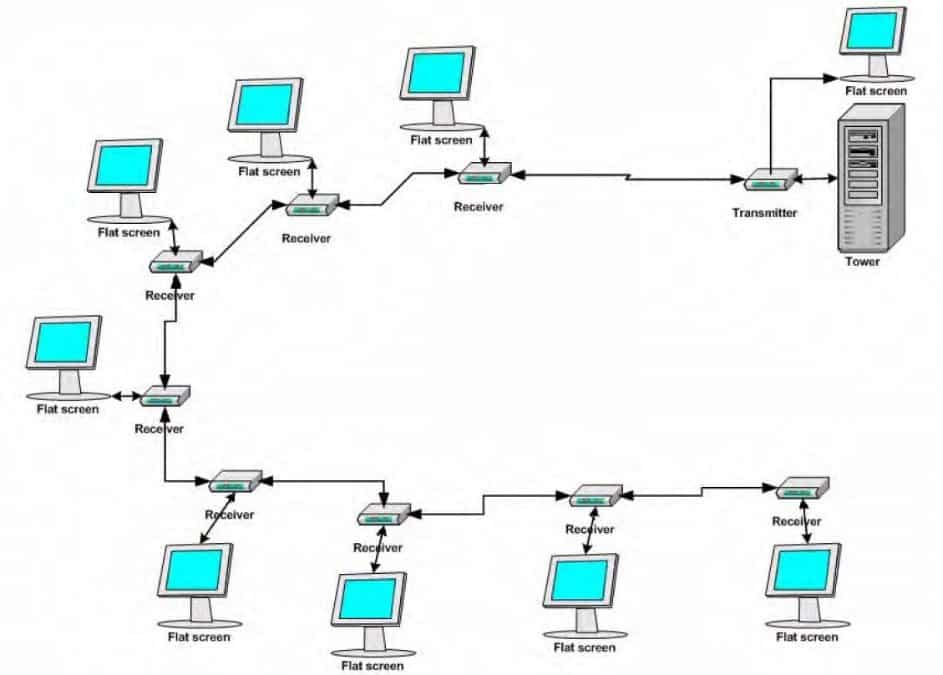 Many of the buildings on the campus may be sev- eral miles away. Broadband fiber-optic links can be used to get the cable TV signal to each building. The cable TV is then distributed in each building via coax the last several 100 ft.

There are many broadband RF applications for fiber. One important application is satellite uplinks and downlinks. Commercial satellites, for long wavelength applications, typically use an intermediate frequency (IF) signal as a means of communication. The IF signal is typically 70 or 140 MHz. The signal has a limited transport distance over copper coax. The noise level and sensitivity of a satellite system will suffer with the use of copper coax. The relatively high band- width and noise sensitivity issues make IF signal transport ideal for fiber.

Consumer and residential satellite service is finding its way into more and more commercial, corporate, and military applications. Consumer satellite equipment is used in many applications as a source of information and news. A large corporation may use consumer satellite instead of cable for news and infor- mational content. In a corporate building or military bunker, the satellite dish may be on the roof many floors above the control or conference room. The L- band signal has a bandwidth from 950–2,150 MHz. A coax run will not transport the L-band satellite signal very far. A consumer satellite dish is small due to a shorter wavelength. It typically has a device called a low-noise block downconverter (LNB). The LNB is an active device that receives the satellite signal and translates and amplifies it to be sent down the coax to the receiver. The LNB requires a DC voltage, which is typically generated by the receiver and sent up the coax. If a fiber link is used, the DC voltage needs to be generated on the dish side of the fiber link. When designing an L-band fiber link, the system needs to provide the appropriate LNB DC power.