The beautiful thing about bonded cellular video is having the ability to diversify cellular networks just as someone might diversify stocks in a financial portfolio.

In the United States, there are four major carriers (Verizon, AT&T, T-Mobile, Sprint). You could have up to 10 modems in some units. Usually, what we’ll recommend is having two modems from each of the major carriers in order to attain a sort of cellular network diversity. So we’ll have two Verizon, two AT&T, two Sprint and two T-Mobile.

Ninety-nine percent of the time, just one or two of the networks will carry most of the load and you can probably guess which ones those are. You’ll want the diversity to cover the potentially spotty areas of coverage of the other networks. Additionally, if there’s a big crowd in a stadium, you’ll be thankful. 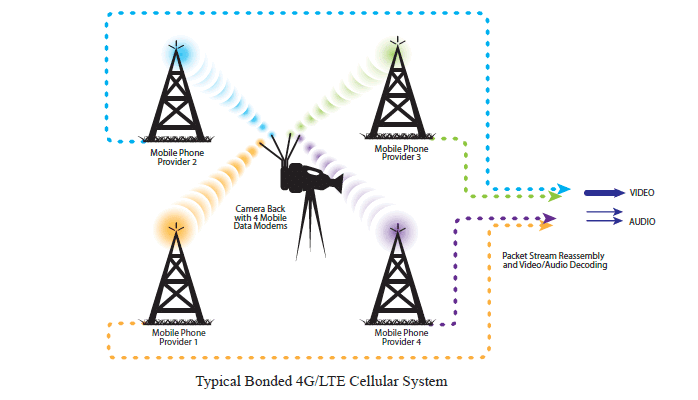 One of the four carriers will give you some throughput.  Let’s say you’re in an area with some rolling hills and you only manage to get 400 or 500 kilobits per second per modem. Aggregate that over 10 modems and you get two, three, four, five megabits per second through easily. Broadcasters often get up to a ten megabit per second back to master control with as little as three seconds of latency using this method.