Live television coverage of sporting events has long been a major focus for wireless video technology. With predetermined schedules, predictable camera locations, and carefully negotiated broadcaster rights, these events are near-ideal sites for wireless technology. Prior to an event, antenna and receiver equipment can be installed in strategic locations. RF channel usage can be coordinated and tested in advance to prevent harmful interference between systems.

Many of the systems commonly used for sports today rely on private, licensed wireless frequencies. These same technologies can also be used for outdoor concerts and other forms of entertainment. Through the use of high-gain (i.e. narrow beam) antennas, potential sources of interference can be avoided. Handheld portable cameras can be equipped with omni-directional antennas provided that adequate RF coverage can be generated in areas where the cameras will be operating. Video compression is used as needed to allow the signals from multiple cameras to fit within licensed bandwidth ranges.

News events fall into two broad categories: appointment-based and spontaneous. Appointment-based news includes events such as news conferences, public gatherings, feature stories, and other occurrences that allow a news team to pre-plan coverage and setup equipment in advance. In many ways, the technologies and practices used in this type of coverage are similar to those used in sports applications.

Spontaneous news coverage can be much more challenging from a technology standpoint. Fires, floods, accidents, and other unplanned events can happen in any location at any hour of the day. Traditionally, methods used for spontaneous live broadcasts typically involve sending a vehicle equipped with either a satellite uplink antenna or a telescoping mast carrying a microwave antenna. To work properly, these antennas need to be pointed directly at the receive antenna with few or no obstructions in-between. Cameras are typically tethered to the live remote vehicle using a fiber-optic, coax or triax umbilical to carry video, audio, and power to handheld or tripod-mounted cameras. In some cases, wireless links are used to connect between cameras and the vehicle. 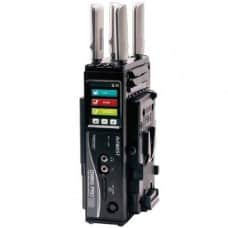 give a great deal of flexibility to broadcasters, both for covering spontaneous news events and for truly mobile applications such as in a moving vehicle. To make this scenario practical, receive antennas need to be liberally distributed around a service area to pick up signals from cameras wherever they may be located. The logistics and expense of doing this would be beyond the means of the most broadcasters were it not for the widespread availability of cell phone towers. This infrastructure, which has been installed at huge expense over several decades is a near-ideal path for live video signals throughout a metropolitan area using systems like the AVIWest DMNG Pro110 Bonded Cellular Video Uplink. Instead of having to build their own infrastructure, broadcasters can simply pay for bandwidth when and where they need it. Of course, since this infrastructure is shared by other broadcasters as well as by the general public, there is no way for a broadcaster to control how much (or how a little) bandwidth is actually available for a given video signal at a particular time and location.