NYU has been working on some of these technologies. They have a Millimeter-wave and a 5 GHz Wireless Research Department at NYU, and they’ve been doing some interesting developments. They’ve been able to demonstrate some interesting studies both in the lab and real-world. They’ve been able to push 10 Gigabits per Second on a 74 Gigahertz carrier. The technology is starting to come out. We have plans later this year to come out with some 60, 70, and 80 Gigahertz solutions that will push upwards of 10 Gigabits.

Like any university there’s corporate sponsors, so NYU has been working with Nokia and National Instruments to develop some of these technologies. They’ve been using some 2 by 2 MIMO antennae schemes, and they’ve also been using a Single Carrier Null Cycle Prefix modulation.

The interesting thing about this is, in our industry we’ve heard of COFDM or OFDM type modulation. You don’t hear SC-SP modulation that often, and it does show some increased efficiencies in power consumption as well as better dynamic range for the transmitted signal versus OFDM or COFDM.

Battelle has also done some interesting work in the 100 Gigahertz spectrum and above. They’ve actually filed a petition with the FCC, that appears to be bypassing opposition to operate either license free or with a license in the 102 to just under 110 Gigahertz spectrum. If you Google Battelle and the FCC you can see some of the public notices about this petition that they’ve put forth, and it looks like it’s going to go through.

For those of you that don’t know, Battelle is a non-profit engineering research entity. I’m not sure if they’re affiliate with any universities. I think they kind of stand on their own. They develop technology with the intention of licensing it to the commercial sector, so they’re doing this research. I think they’re looking for investors or licensees to take this technology once it’s been FCC approved and commercialize it.

They’ve had some successful tests, 10 Gigabits per Second and above. I’ve seen some of this equipment at NAB in years past. Again, it’s still in its infancy. It’s not commercially available yet, but there have been some successful demos and trials done with this technology. There have been some regulatory barriers above 100 Gigahertz. It’s encouraging that Battelle is leading the charge in this area. It serves all of us, for us to petition, to get the FCC to open up more spectrum for wireless communication, video communication in particular. 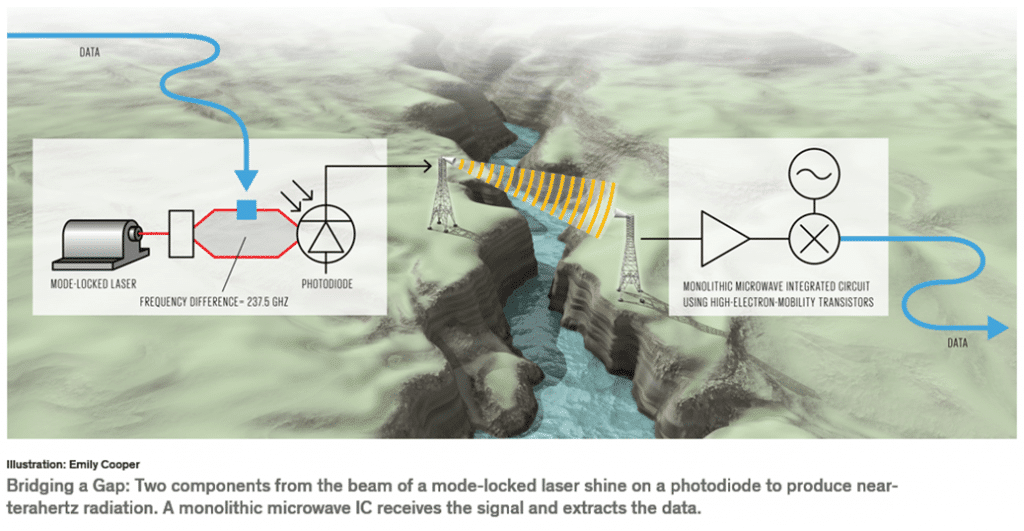 As far as German institutions, we have the KIT, the Karlsruhe Institute of Technology, the Fraunhofer Institute for Applied Solid State Physics, and the University of Stuttgart. They have successfully modulated some radios to operate 100 Gigabits per Second on a 237 Gigahertz system. They actually modulated a laser on a photodiode to produce a near Terahertz radiation, so this combination of lasers and photodetectors as the emitter or the exciter for this high frequency transmission.

Beijing Olympics Use of 120 GHz 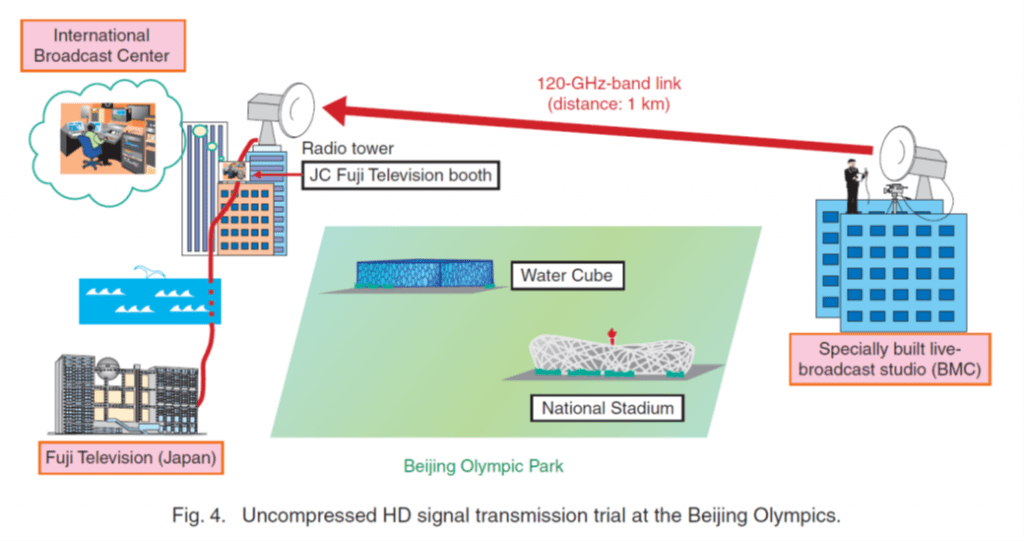 The Beijing Olympics utilized the first commercial use of 120GHz.  We need the regulatory approval to operate at 120 GHz in United States and Europe.  It is relatively easy to get an experimental license to do this type of testing, but it does take some regulatory/political lobbying to get your application approved, and to get a specific channel, or a new slice of spectrum approved for Ethernet or video communication use.

It’s encouraging that the technology is there, it’s not just theoretical, it’s not just experimental, the commercial viability is there. Samsung has been very instrumental in promoting 60 Gigahertz when it comes to short range WiFi. They’ve developed chipsets and have come up with some small form factor radios to push 3.6 Gigabits per Second and the 577 Megabits per Second for mobile devices.