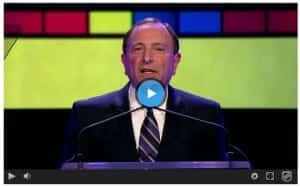 NEW YORK – The National Hockey League was awarded three of the most prestigious honors tonight at the 2014 Sports Business Awards, winning “Sports League of the Year,” “Sports Executive of the Year” recognition for Commissioner Gary Bettman and “Sports Event of the Year” for the 2014 Bridgestone NHL Winter Classic. The annual event, hosted by The SportsBusiness Journal and SportsBusiness Daily, honors excellence in sports business for the period from March 1, 2013 – February 28, 2014. The awards were presented before a record crowd of more than 800 at a special ceremony held at the New York Marriott Marquis in Manhattan.

“While I am extremely proud to receive this award, I am more proud of the great people at the National Hockey League who helped make 2013-14 a record-setting season on a variety of levels — including thrills, excitement and fun,” Commissioner Bettman said. “I also thank our Clubs, our broadcast and business partners and the best fans in sports for their support; I know that their combined power will generate an even-brighter future for NHL hockey.”

The “Sports League of the Year” recognition was the NHL’s second in four years. The League was previously honored with a Sports Business Award in this category in 2011.

Accepting the award was NHL Deputy Commissioner Bill Daly, who said, “Our athletes are the best in team sports. We wouldn’t be standing here tonight without the players.”

Other nominees for “Sports League of the Year” were the Atlantic Coast Conference, Major League Baseball, Major League Soccer, NASCAR and PGA Tour.

The 2014 Bridgestone NHL Winter Classic at the University of Michigan’s “Big House,” which shattered the previous hockey attendance record with a crowd of 105,491, captured its second Sports Business Award for “Sports Event of the Year,” previously winning in 2009 for the inaugural 2008 NHL Winter Classic in Buffalo. Accepting the award was NHL Chief Operating Officer John Collins.

“What makes the NHL Winter Classic so special is the way our fans and our players have embraced it,” Collins said. “Our great partners at Bridgestone and NBC also play a vital role and we’re grateful to the SportsBusiness Journal for once again recognizing the Winter Classic as an event that does what sports is supposed to do: Bring people together to create unforgettable memories for generations of fans.”

Other nominees for “Sports Event of the Year” were Super Bowl XLVIII, the 2013 Breeders’ Cup World Championships, the 2014 Waste Management Phoenix Open, The ONE: Mayweather vs. Canelo presented by Showtime Networks.