IP to the Camera – Completing the Broadcast Chain – Part 3

Stagebox is a compact unit that clips onto the back of a professional video camera using a standard V-Lock or Anton Bauer battery plate.  Stagebox combines all the camera interfaces including HD SDI, audio, intercom, IFB, timecode and camera control into a single Ethernet compliant CAT 5 or CAT 6 network connection.  The system also handles the generation and distribution of genlock providing an infrastructure for synchronous multi-camera production.

The heart of the Stagebox hardware consists of an ARM Cortex-A8 processor and a Xilinx FPGA.  It includes the traditional inputs and outputs required by a broadcast camera.  The Stagebox includes an HD SDI input and output utilizing two full-size BNC connectors as shown in figure 4.

The processing latency is currently two frames.  Future firmware updates will achieve a latency of one frame.

The system interfaces with an IP network via an electrical or optical Ethernet small form pluggable or SFP I/O device.

The Stagebox includes a 12 VDC input on a four pin XLR as well as an RS-232, RS 422 and LANC camera control interface via a Lemo connector as shown in figure 5.

The top of the Stagebox provides a multi-colored tally indicator with red for live, amber for standby and blue for alternate.  The system also provides a Wi-Fi antenna connection for administrative control and a reset button as shown in figure 6.

The Stagebox Typhoon Ingest Card along with the Stagebox Camera Back, enables end-to-end all IP workflows.  Stagebox is simple means of providing television production connectivity over Internet protocol connections.  The Typhoon card enables the capture of multiple compressed streams received on Ethernet or uncompressed streams via HD SDI BNC I/O’s as seen below in figure 7.

This maintains original encoding without the need for converting to baseband, as is the case with current capture cards.  This card simultaneously performs HD SDI play out of streams received on the IP network.  A reference input provides genlock for synchronous HD SDI play out.

Stagebox performs an AVI-100 video encoding and multicasts packets on a gigabit Ethernet network.  A workstation with a Stagebox Typhoon Ingest Card at the receiving endpoint performs the following functions:

A computer or server operating system is not able to perform the real-time decoding of four channels of 10 bit HD SDI video for monitoring.  The Stagebox Typhoon Ingest Card offloads the decoding workload to hardware.  Please see the four channel Typhoon multiviewer window pictured below in figure 8.

The Stagebox Typhoon Ingest Card gets its processing power from two public Xilinx Kintex7 FPGA’s as pictured below in figure 9.

The data paths supported by the Typhoon card include: 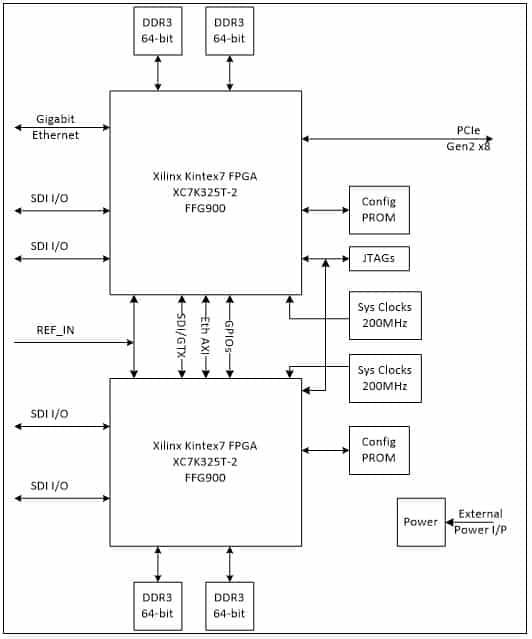 The Typhoon card supports the de-encapsulation of audio RFC 3550 and video RFC 6184 carried over UDP/IP networks.  Four channels of 10 bit 4:2:2 AVCI-100 video are supported for decode with resolutions up to 1080p30.  Support for 1080p60 and 4K video are on the future roadmap. The card also supports 16 channels of 24bit LPCM audio for each video channel.