Is webcasting still the future?

Broadcasting live video to the internet, or webcasting, is already a powerful tool for houses of worship, but what will it mean in the future?

WEBCASTING HAS COME A LONG way since its advent in the mid 1990s. Back then it was Apple who pioneered the technology, first broadcasting concerts online in 1995 and 1996, swiftly followed by the Grammy Awards. By August 1998 a wedding was broadcast over the internet for the first time and then the world slowly woke up to the potential of delivering video content via the world wide web. In the years since it has become a cornerstone of content delivery for everyone from major broadcasters to houses of worship seeking to spread the word far beyond the walls of a sanctuary. 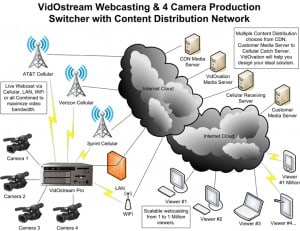 But in that time the technology required to make webcasting a reality has developed enormously, dropping in price and becoming increasingly simple to use. Meanwhile, the way congregants watch content has changed. Once the only way to watch a webcast was on a desktop computer, now people can view vastly improved content on a smartphone or a tablet – a technology pioneered, ironically, by Apple.

So is webcasting still the future or has it become the present? The answer, it seems, is that its time has very much arrived.