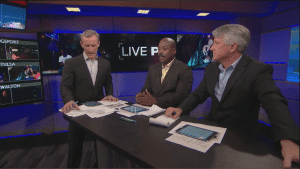 A&E executive vice president and head of programming Elaine Frontain Bryant explains what the network hopes to accomplish with the series:

“This is bold and innovative. We have six police departments from six different and diverse cities around the country—diverse in region and demographics—coming together to do a live show. We’re embedded with the police departments to give a view of what’s going on in America regarding police and crime. We have a studio with six different cities, and we will go in where the action is happening.”

VidOvation and AVIWEST partnered with A&E to provide bonded cellular systems for the series, maintaining connectivity in the six cities, all of which have different cellular connection challenges.

Get the facts about bonded cellular

“The major criteria was to transmit video and audio from up to five cameras in close proximity with perfect lip-sync and video synchronization between all cameras,” Jachetta says.

The production is deploying AVIWEST’s DMNG PRO180-RA, using 34 systems across six cities. Two camera operators and a drone overhead, each with an HD camera and a DMNG PRO180 8 modem cellular transmitter, are covering the action outside the vehicle.

“What I want to accomplish is to join the conversation by saying, ‘OK America, this is what everyone is talking about,’” Frontain Bryant concludes. “Let’s see six typical American cities on a Friday night.” 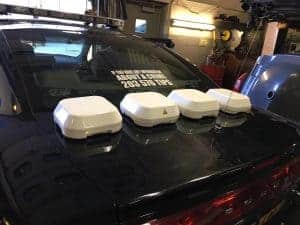 Live PD premiered on Oct. 28 and airs every Friday.