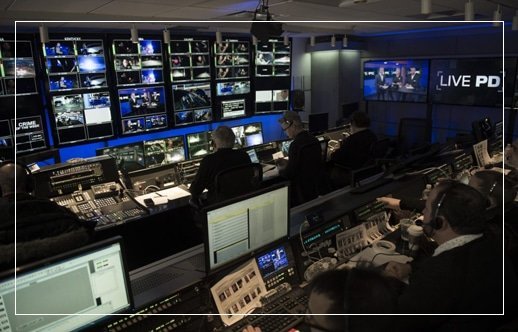 “‘Live PD’ is the first show of its kind to capture and stream live video of police officers on patrol and, to our knowledge, the first primetime entertainment television program to push the capabilities of bonded cellular technology well beyond that of a typical stationary news report. Every episode represents a phenomenal technical achievement, the perfect blend of technology and editorial content to deliver a transparency in police work never seen before on television,” said Dan Cesareo, founder and president of Big Fish Entertainment. “AVIWEST was the only bonded cellular solution we tested that could help us accomplish our creative goals for the show. The VidOvation-AVIWEST team really went the extra mile to help meet our technical requirements and make ‘Live PD’ a resounding success.”

Each “Live PD” episode offers viewers a live, unfiltered look inside some of America’s busiest police departments and the communities they patrol. One of the biggest production hurdles was capturing high-quality live HD video from multiple cameras and streaming it to air in real time. On a typical Friday night, “Live PD” covers officers on patrol in six cities, with as many as 40 live video feeds coming into a New York-based control room at A&E headquarters. With such a large quantity of feeds, traditional satellite or microwave links would not only be cost-prohibitive, but would not provide the necessary mobility and flexibility. The solution was bonded cellular technology, which bonds any available combination of network interfaces including local cellular and Wi-Fi networks, Ethernet, and satellite for high-quality and reliable video transmission links.

The “Live PD” crew uses 41 AVIWEST DMNG PRO180-RA bonded cellular transmitters, including one for each of two HD cameras in every patrol car and two additional camera operators as well as an overhead drone to cover the action outside the vehicle. Additionally, the team has installed four AVIWEST QUAD external antenna units to each patrol car for even faster network acquisition and greater signal resilience. Throughout the three-hour show, the DMNG PROs feed up to four video channels and eight audio channels of live, high-quality video back to the control room in New York from every patrol car in all six cities. In the control room, an AVIWEST DMNG StreamHub receiver, decoder, and distribution platform receives the live video feeds and delivers them to air for the live broadcast.

“We tested several bonded cellular systems, but none of them could handle the multicamera and multilocation format of the show — except one,” said Larry Barbatsoulis, the show’s technical supervisor. “The AVIWEST DMNG system proved its ability to transmit video and audio from up to five cameras in close proximity and with perfect lip sync and video synchronization between all cameras.”