TORONTO—The White House has its Situation Room. The National Hockey League has one, too. Unlike the White House version, the NHL Situation Room is solely concerned with hockey; specifically, live monitoring of all the plays taking place in up to 16 simultaneous NHL games/feeds across North America.

The NHL Situation Room is located in a 10th floor office inside a tower adjacent to Toronto’s Air Canada Center, in the heart of downtown.

The room itself measures about 20×40 square feet in size. Walk in, and the first thing you see is the front wall HD video display along one of the walls. The overhead projector-driven central screen measures nearly 7 feet diagonally, and can be split to show 16 separate video windows. Since there are 30 teams in the NHL, this means that the central screen can show all 15 games at once, with one video window to spare.

Looking towards this screen is “The Bridge,” the room’s length-wise control center, where the day’s game managers stay in close contact with game officials. This is where Mike Murphy and his key people sit when the games are on; eyes glued to the TVs, and watching the overhead red strobe lights that flash whenever a call is coming in from a game. (There’s too much going on in the NHL Situation Room to rely on audio telephone alerts.)

Each NHL Situation Room workstation is equipped with four 24-inch HD monitors. The first screen on the left shows the game as distributed on a satellite TV feed. The next two screens show real-time feeds direct from the arena’s on-site broadcasters (home and away) via fiber-optic cable. Thanks to satellite latency, it is common for the satellite feed to be up to 15 seconds behind the live feed.

The fourth HD screen on the right, with its screen split into four video windows, is the one that really matters. Using feeds synchronized off-site by NeuLion in New York—and fed to Toronto via fiber-optic cable—the top two windows show the two broadcast arena fiber-optic feeds. The lower two windows show the goal zones at both ends, using either an operator- selected above-net or in-goal camera. (These cameras belong to the NHL, and their feeds are only shown on air if the NHL decides to release the footage to the broadcasters.) 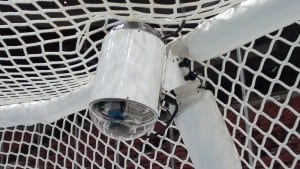