A digital pulse train represents the ones and zeros of digital information. The pulse train can also depict high and low electrical voltage levels or the presence and absence of a voltage.

Digital in the Television and Video Industries

A digital signal can mean different things to video and cable TV system engineers, causing much confusion. The most common types of digital video and audio are:

• SONET, ATM, or other telecom base standards

The process of digitizing a standard NTSC video signal is straightforward. The typical bandwidth of a video signal is 4.5 MHz. Typically a sample rate of four times the video bandwidth is used or about 18 mega- samples per second. The analog-to-digital (A/D) converter typically has a sampling resolution of 8, 10, or 12 bits.

This process generates a serial digital data stream of about 144–270 Mbps. The video signal is typically encoded in a digital format at the video source or in the video camera. Depending on the digital video format, the analog video will be encoded in one of several standard formats such as 4:2:2, 4:1:1, or 4:2:0. While these encoding schemes are not referred to as compression, they omit or remove certain information to reduce the systems bandwidth requirement. In the encoding schemes above, the three digits refer to the three common components of video. The first component is luminance (Y) or the light intensity of the video signal. The second is the color signal of red minus luminance (R–Y). The third component is the color signal of blue minus luminance (B–Y). These three components are referred to as YUV. The numbers 4:2:2 have to do with the fact that twice the bandwidth is used for the Y channel than the two color channels. This technique is a form of compression that will be addressed later in the chapter. HDTV or high-definition video requires a data rate of 1.485 Gbps for one uncompressed signal.

Digital video transmission has many advantages over analog transmission. An analog fiber-optic system requires high-linearity optical components that are expensive and require fine tuning and complex calibration procedures. Once a video or audio signal has been digitized, it can be transported via fiber using readily available digital telecom optical components for both multimode and single-mode applications. A digital system has a higher immunity to noise and superior performance characteristics compared to an analog system. A digital signal can be regenerated and repeated virtually indefinitely without signal or performance degradation.

When compression is introduced into a video trans- port system, a substantial reduction in bandwidth can be implemented. A digital composite signal requires

144 Mbps and an HD-SDI signal requires 1.485 Gbps. When considering a system that will transport many channels of digital video, an enormous amount of bandwidth is required. A compression system removes redundant or repetitive information from the digital data stream. A compression or transmission encoding scheme will take advantage of limitations in the human eye. The human eye has lower sensitivity or resolution to color detail. Many compression or encoding schemes take this into account and compress or omit certain color details.

A lossy compression scheme can achieve very high levels of compression but at the cost of image or signal quality. A lossy compression algorithm removes detail from the original image. Once the information has been removed, it cannot be reconstructed. There are many compression and encoding schemes used in video transport. The 4:2:2, 4:1:1, and 4:1:0 encoding schemes mentioned earlier are a technique used to reduce bandwidth. Since the human eye has less sensitivity or less resolution for color, these encoding schemes have less bandwidth for the color information. The human eye has higher resolution horizon- tally than vertically. When taking this into account, most video formats have a higher horizontal resolution than vertical resolution. 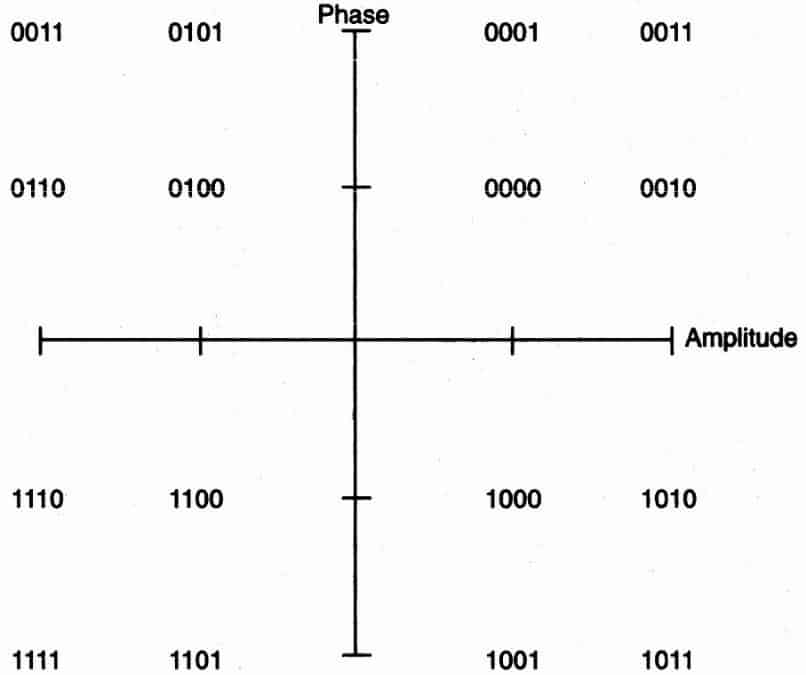 Quadrature amplitude modulation (QAM) is a widely used modulation technique for video transport applications, particularly in digital cable TV systems. In a serial digital modulation scheme there are only two informational states: 1 and 0, or on and off. With 256- QAM there are 256 states. The information is encoded by a varying 360 degree quadrature phase and amplitude. This modulation scheme can provide an enor- mous amount of data throughput in a limited amount of bandwidth, but a higher signal-to-noise band ratio is required. Figure 6.10-12 is the phase constellation for a 16-QAM signal.