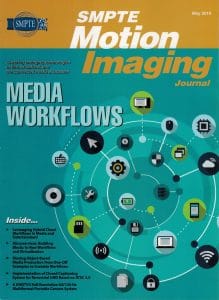 The second 2018 monthly meeting of the Washington, D.C., Section took place on 15 February at the National Association of Broadcasters head­ quarters in downtown Washington. The event held jointly with Chapter 37 of the Society of Broad­ cast Engineers, featured speaker Jim Jachetta, chief technology officer and executive vice presi­dent of VidOvation, describing his company’s work in helping to meet the technological challenges in con­nection with a fast-paced live reality television show.

An opportunity for socializing and networking preceded the pro­ gram, which was called to order by Section Chair Tom Hackett. Hackett acknowledged Section members present and introduced Program Committee Chair, Eric Wenocur, who provided informa­tion on future Section meetings and other activities.

Jachetta began the presentation by describing his company’s role in assisting with the production of an A&E television series, “Live  PD.” He recalled that he was approached by show producers looking for a cost-effective solution for doing the fast-paced live show from as many as seven different cities simulta­neously with as many as 36 cam­eras being deployed in police cars and by on-foot camera operators. Further complicating matters was the requirement for operation of the mobile cameras at speeds as great as 130 miles/hr and maintaining pre­cise synchronism between cameras and accurate lip-synch, as the show runs live without an opportunity to fix slippages in post-production.

The solution proposed and adopted was the use of bonded cel­lular video/audio transmission tech­nology, utilizing connectivity with multiple service providers to ensure reliability. Jachetta described the spe­cialized antenna units deployed on the various police cars involved in the show, noting that their protective ” radomes” resembled Styrofoam food containers, leading some to joke about the “Chinese carryout” placed on the trunk lids of the police vehi­cles. An appropriate number of streaming video transceivers were deployed at the A&E master control facility in New York City, where the show was switched. He reported that the project was successful, make the industries first Live Reality Show possible.

Broadcast engineers and operators are always looking for ways to cut the cost of contributing and distributing video between the network and affiliates or between the field and master control. The traditional approach

is to use an expensive telecom connection or satellite circuit, but a far less costly alternative is to send video through the public internet or unmanaged networks, which are practically free. This alternative approach — made possible by AVIWEST’s Patented SafeStreams technology — is already helping major networks save money.

The SafeStreams technology minimizes or eliminates the need for an on-site production truck for remote productions. The transport protocol maintains perfect genlock and lip sync across multiple live IP video connections providing broadcasters with the ability backhaul all cameras back to master control for an “At Home,” or Remote Integration (REMI) production. 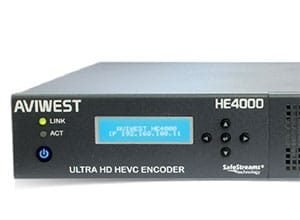 HE4000 HEVC Encoder with SafeStreams for Transport over the Public Internet

This session will address the two overarching applications for this technology: 1) contributing/distributing video through the public internet using the AVIWEST HE4000 4K & HD HEVC Encoder, and 2) using the bonded cellular method to backhaul live video from the field synchronously during remote-integration (aka REMI) productions. Attendees will get an overview of the

types of distribution, including point-to-point and point-to-multipoint, and learn how to configure and implement SafeStreams technology correctly in different types of topologies, design a tailored system, and prevent costly mistakes. Attendees will also get a look at the magic of SafeStreams through a real-world example — A&E’s highly popular “Live PD.” The protocol makes it possible to do the unprecedented — home-run video from up to 41 cameras in eight cities back to master control in New York, all in perfect synchronization and lip sync.