Son of GoalCam at Game 5 of Stanley Cup Final

We have the VidOvation GoalCam set and ready for game 5 of the LA Kings vs the NJ Devils at the Prudential Center in Newark NJ. Today might be the end of a long season but there have been many surprises leading to and during the Stanley Cup Playoffs.

The broadcast production crews and producers refer to our In-net GoalCam as the Son of GoalCam. I guess this means the original over-head GoalCam is the Father.

The NJ Devils hardly dominated the league with a #6 seed in the playoffs. New Jersey went 7 games to beat the Florida Panthers a #3 seed in the first round. Then they beat the #5 seed Philadelphia Flyers in 5 games. The worst part is that the Devils beat my home team and #1 seed NY Rangers in 6 games. Unfortunately my hero Henrik Lundqvist could not carry the whole team. The Devils are 3-0 in series ending games during the playoffs.

Now these two teams face each other in game 5 of the Stanley Cup Final. The Devils are at home down 3-1 in the series. I anticipate a long night with some overtime. Watch the game on NBC at 8PM ET.

Otherwise, watch game 7 of the Miami Heat and Boston Celtics on ESPN. Just kidding! Please watch hockey. I have recently been accused of only talking about Hockey, the NHL and the GoalCam. It has been a lot of fun working for the NHL this season. We look forward to many seasons to come. 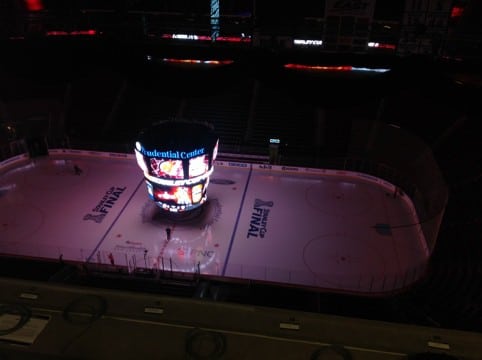