Wavelength remains a significant factor in fiber-optic developments. Figure 3 illustrates the wavelength “windows.” Table 1 shows the wavelength of each optical window and the typical application for multimode (MM) or single-mode (SM) operation. 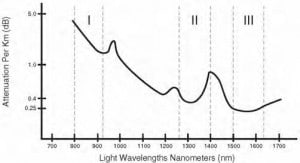 The earliest fiber-optic systems were developed at an operating wavelength of about 850 nm. This wavelength corresponded to the so called “first window” in a silica-based optical fiber, as shown in Figure 3. This window refers to the wavelength region that will offer a low optical loss that sits between several large absorption peaks. The absorption peaks are caused primarily by moisture in the fiber and Rayleigh scat- tering, which is the scattering of light due to random variations in the index of refraction caused by irregu- larities in the structure of the glass.

The attraction to the 850 nm region came from its ability to use low-cost infrared LEDs and low-cost sili- con detectors. As technology progressed, the first win- dow lost its appeal due to its relatively high 3 dB/km losses. Most companies began to exploit the “second window” at 1310 nm with a lower attenuation of about 0.5 dB/km. In late 1977, Nippon Telegraph and Telephone developed the “third window” at 1550 nm. The third window offers an optical loss of about 0.2 dB/km. 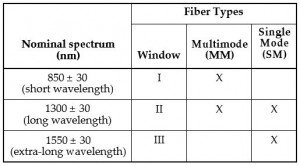 The three optical windows—850 nm, 1310 nm, and 1550 nm—are used in many fiber-optic installations today. The visible wavelength near 660 nm is used in low-end, short-distance systems. Each wavelength has its advantages. Longer wavelengths offer higher performance, but always come with higher cost.

Table 2 provides the typical optic attenuation for each of the common wavelengths versus the fiber- optic cable diameter. A narrower core fiber has less optical attenuation. 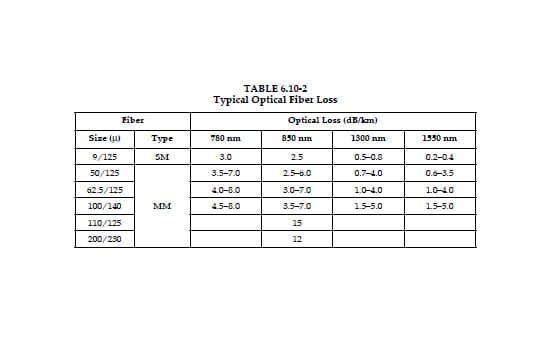