Early fiber optics exhibited high loss that limited transmission distances. To correct this, glass fibers were developed that included a separate glass coating. The innermost region of the fiber, the core, carried the light, while the glass coating or cladding prevented the light from leaking out of the core by refracting the light back into the inner boundaries of the core. Snell’s Law explained this concept. It states that the angle at which a light reflects as it passes from one material to another depends on the refractive indices of the two materials. 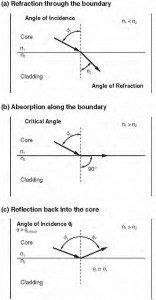 Advancements in laser technology next elevated the fiber-optics industry. Only the light-emitting diode or its higher powered counterpart, the laser diode, had the potential to generate large amounts of light in a focused beam small enough to be useful for fiber optic transport.

Communications engineers quickly noticed the importance of lasers and their higher modulation frequency capabilities. Light has the capacity to carry 10,000 times more information than radio frequencies. Because environmental conditions, such as rain, snow, and fog, disrupt laser light, a transmission scheme other than free space was needed. In 1966, Charles
Kao and Charles Hockham, working at the standard Telecommunications Laboratory, presented optical fibers as an ideal transmission medium, assuming fiber optic attenuation could be kept under 20 dB per kilometer. Optical fibers of the day exhibited losses of 1,000 dB/km or more. At a loss of 20 dB/km, 99% of the light would be lost over only 1000 meters (3300 ft).

Scientists theorized that the high levels of loss were due to impurities in the glass and not the glass itself. At the time in 1970, an optical loss of 20 dB/km was within the capabilities of electronics and opto- electronic components for short distances (less than 1 km) but not for longer distances (greater than 1 km). Dr. Robert Maurer, Donald Keck, and Peter Schultz of Corning succeeded in developing a glass fiber that exhibited attenuation at less than 20 dB/km, the limit for making fiber optics a usable technology. Other advances of the day, such as semiconductor chips, optical detectors, and optical connectors, initiated the true beginnings of the fiber-optic communications industry.