VidOvation is a Video Communications Company 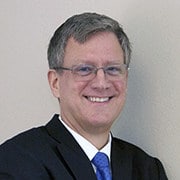 Larry Jordan: Jim Jachetta is the Founder and President of VidOvation. For over 20 years, Jim’s been designing, integrating and delivering video, fiber optic and data communications systems and recently they’ve expanded into wireless video with some new technology being used by the NHL. Hello, Jim, welcome.

Jim Jachetta: Hi, thanks for having me. Pleasure to be here.
Larry Jordan: We are delighted to have you with us and let’s start with a really easy question. First, tell us about what VidOvation is.
Jim Jachetta: VidOvation is a video communications company. We manufacture solutions for wireless, solutions for fiber optic transmission, for webcasting, we make encoders to stream video over your corporate network or through the internet, but in a nutshell we help our clients move video from Point A to Point B and our tagline is ‘Moving video forward’, so we’re staying up to date with the latest technologies such as what we did for the National Hockey League, using 60 gigahertz transmission for uncompressed wireless video.
Larry Jordan: Let’s just take a second. We understand that you guys are in the business of moving video, but you’re one of the founders of the company. Why did you decide to start the company? What made that so intriguing to you?
Jim Jachetta: Well, I guess I have my dad to blame for that. My dad had an entrepreneurial spirit. My dad was an engineer at ABC, CBS and his longest and final stint was at NBC, so he worked at 30 Rock for about 12 years before starting a company called MultiDyne and, as kids, my brother and I, we always worked for our dad so junior high we helped stuff circuit boards and build a lot of his audio visual equipment, so it’s in our DNA and my dad was a great problem solver and my brother and I have inherited that work ethic of doing the never been done before and solving our clients’ problems or helping with their business workflow.