When WPSD Local 6 needed to expand its field newsgathering capabilities, it turned to

VidOvation’s AVIWEST DMNG PRO 180 3G/4G bonded cellular video transmission system. An ultra-compact and highly portable camera-mounted device, the DMNG PRO enables WPSD news teams to transmit live, high-quality video from the source of breaking news and other live events without having to deploy bulky and costly microwave equipment. In addition, WPSD has deployed the AVIWEST DMNG APP iOS to news team members, enabling them to use their iOS®-based smartphones to transmit video content instantly from the phone’s front or rear camera.

As the NBC affiliate station based in Paducah, Kentucky, WPSD serves a broad viewing area that includes portions of Illinois, Missouri, Arkansas, and Tennessee as well as western Kentucky.

“Like any family-owned, medium-sized TV station, we have to be budget-conscious,” notes Mike Spissinger, WPSD’s Chief Photographer. “That means our news staff sometimes has to travel long distances to reach breaking news stories.”
WPSD had traditionally relied on microwave transmitters for live shots from remote locations, an approach that wasn’t always practical or feasible. “We recently experienced a technical glitch with our microwave receiver that brings in the live shots from Southern Illinois,” Spissinger explains. “We are at the mercy of scheduling tower climbers to fix problems like this, but that’s not an easy or quick task — especially in the winter months.”

He described a breaking weather news situation in which heavy rains caused rivers to rise to unusually high levels and resulted in evacuations, levee breaches, and road and bridge closures. On that occasion, the microwave receiver’s technical issues prevented WPSD’s news trucks in Southern Illinois from transmitting live shots.

A Versatile and Flexible Solution

Spissinger was first introduced to VidOvation’s AVIWEST bonded cellular newsgathering systems at the 2014 NAB Show. Weeks later, WPSD brought a DMNG PRO into its operation for testing. After a highly successful trial run covering the same November floods, in which multiple reporters were able to go live from the water’s edge during a single newscast, WPSD decided to purchase a complete DMNG PRO system.

“Of course we evaluated bigger and better-known bonded cellular vendors — with bigger price tags — but when we saw the DMNG PRO’s compact footprint I was a bit skeptical. Where was the bulky backpack and the big antenna?” Spissinger comments. “But after that flood I became a believer.”

Back in the WPSD station, an AVIWEST DMNG StreamHub receiver, decoder, and distribution platform receives the live video feeds and delivers them to master control for the live broadcast. WPSD is also using the AVIWEST DMNG Manager, which enables the station to manage and control all DMNG PRO and DMNG APP transmissions with a single interface.

Rain, Shine or Snow: Covering Live News When and Where it Breaks

Spissinger notes that the flood story was too important not to cover live. But without the

DMNG PRO, news team would have had to resort to a less reliable workaround such as using microwave trucks to “hop” signals, and some locations were too rugged, remote and muddy for trucks to access. Instead, news crews were able to carry the DMNG PRO into those sites and transmit live shots for a fraction of the cost and hassle. Meanwhile, the microwave trucks could be deployed elsewhere to spread crews wider and give viewers even more comprehensive coverage.

In a later breaking news story during a snowstorm, news crews were able to report on road conditions from multiple locations by broadcasting live from their vehicles using the DMNG PRO and a GoPro® camera.

“Since the DMNG PRO and DMNG APP are so easy to use even for nontechnical journalists, we’re always news-ready. We just turn the unit on and it’s ready to transmit. We can even go live while driving to and from the scene,” Spissinger says.

The DMNG PRO is now a part of WPSD’s daily news cycle, playing a key role in unique, 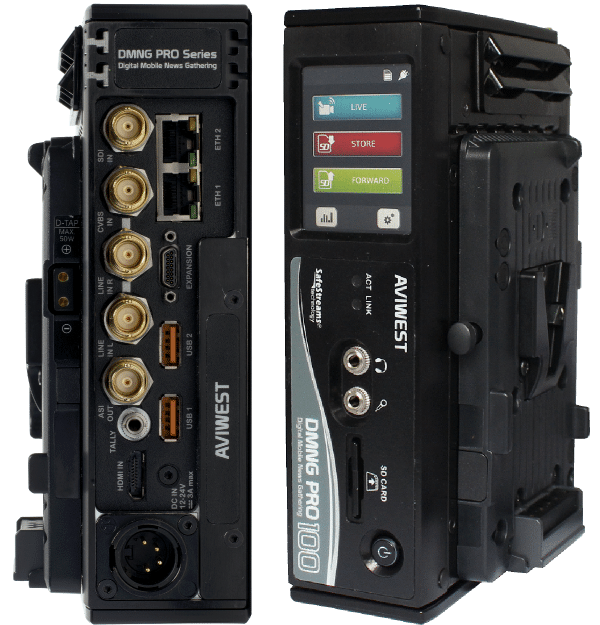 live coverage of everything from flooding and other weather stories to news conferences and sporting events. Reporters have filed live shots of tourists attending Paducah’s world-renowned quilt show, Independence Day fireworks displays, and September’s “Barbeque on the River” event. In addition, most of the station’s newsroom employees have installed the DMNG APP on their smartphones.

“The AVIWEST solutions give us endless new possibilities for creative coverage, not just for breaking news but for sports and local events. For Barbeque on the River, we were free to cover the vendors and charitable organizations cooking there without wires, generator hum, exhaust fumes, or having to find a close parking spot for a truck,” Spissinger says. “And with our journalists carrying around the DMNG APP on their smartphones, they can instantly file a report when they stumble onto a spot news story. That has come in handy for coverage of traffic accidents, fires, and even a basketball team leaving for the state tournament.”

He adds, “We still use our two microwave live trucks, but the AVIWEST solutions are a great addition to our newsgathering toolbox. Even with my 33 years of experience, I have never seen anything to compare with the DMNG PRO and the new flexibility we have in covering breaking news. Without having to deploy a truck, we can be much more spontaneous since we don’t have to look for high ground that’s free of trees or power lines.”