Systems that use licensed, private microwave frequencies for video transmission have been in existence for over 50 years. Fixed link systems can be used to provide one-way and two-way connections between a pair of fixed locations, such as between a television studio and a transmitter site. Typically, these links use parabolic antennas that are located on towers to permit clear line-of-sight paths. 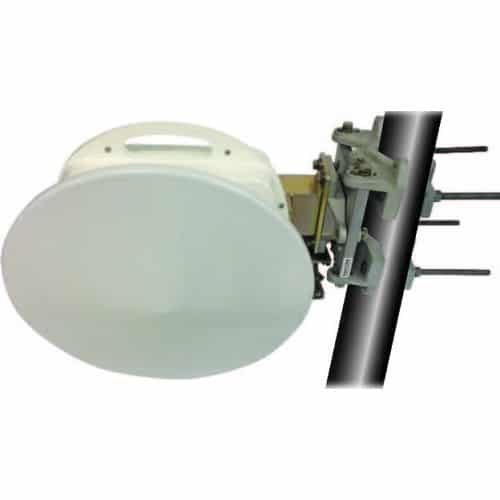 One of the first choices to make in setting up a wireless video network is the selection of the radio frequency (RF) and choosing whether to use a licensed or an unlicensed band of the RF spectrum. The licensed spectrum by definition is regulated by governmental organizations that put in place rules to assign and limit the usage of those RF frequencies. In general, the unlicensed spectrum is minimally regulated allowing more widespread “free” use which in turn generates broader adoption and the potential to be very congested. While licensed frequency bands typically provide less congestion, the use of the available bandwidth can be limited and expensive to license. The demand for higher bandwidth throughout the globe has greatly impacted wireless reliability. Many of the licensed and unlicensed frequencies available from 2 GHz to about 40 GHz are becoming highly utilized and, as a result, increasingly congested with traffic. This can result in poor wireless video transmission and interruptions in service and reliability. To help alleviate this problem government agencies around the world have released unlicensed spectrum in the millimeter wave frequency band for line-of-sight communications. Unlicensed frequency bands have been opened up globally at 60 GHz, 70/80 GHz and 90 GHz. The transmission technology that utilizes these bands is highly directional and, though unlicensed, has minimal to no congestion. We offer both licensed and unlicensed microwave wireless video links.

New high-speed semiconductor technology has enabled the development of affordable, compact wireless systems that can operate in the unlicensed 60 GHz frequency range. 60 GHz systems on the market today oer completely uncompressed HD-SDI operation at 1.5 Gbps, including any embedded audio channels, metadata, SMPTE time code, etc. Because the signals are uncompressed, no encoding/decoding delay is present in the system, making it ideal for sports, live interviews, and other time-sensitive applications. Solutions are also available in the 70/80 GHz and the 90 GHz frequency bands, including high-speed Ethernet links that can support bi-direction GigE speeds, which is great for high-performance IP video and audio networking. Signals operating at these very high frequencies (also known as the millimeter band) have properties that oer some important advantages for video transmission. First and foremost, these signals are readily absorbed lower by the atmosphere, so there is a signicantly reduced chance of a signal propagating beyond its intended receiver. This property also greatly reduces the amount of interference from other sources and makes it possible for many devices to be used in close proximity. Another advantage of high radio frequencies is the short wavelengths, which permit use of very small, high-gain parabolic or horn antennas. These allow highly focused radio beams to be used, further limiting spurious reception and signal interference. Of course, there are limits to the distances over which these signals can be used, with a practical limitation of about 600m or 2000ft. Fortunately, this range is more than adequate for most venues. One other signicant advantage of the 60 GHz band is the fact that these frequencies are globally unlicensed. This means that 60 GHz systems can be used essentially anywhere, and do not require a permit from the FCC or other local agency. This can be a boon for rapid deployment applications where quick installation is paramount.

Transmitting video wirelessly over the 60 GHz spectrum can be an ideal solution for line of sight applications. Clearly, by definition, a wireless solution eliminates the need for cabling such as fiber or coax, which can be difficult or impossible to use in many instances. Additionally, other wireless frequencies come up short for two major reasons. First, lower frequency solutions like Wi-Fi do not have the bandwidth to transport uncompressed HD video. Therefore, they require compress the video at its source, to transmit the signal across wirelessly, and then decompression at the receiver end. This would both add latency and, much more importantly, reduce video quality, which is critical. Second, these lower frequency solutions in unlicensed bands are subject to a great deal of interference, which can adversely affect, and even shut-down, a wireless video stream. This would clearly be unacceptable in many situations, and because of its unlicensed status, anyone with a Wi-Fi transmitter could, accidentally or maliciously, interfere with these transmissions.

While 60 GHz is also an unlicensed band, it differs from the lower unlicensed frequency in two significant ways. The first is in terms of sheer bandwidth. While Wi-Fi spectrum allocation at 2.4 GHz is roughly 85 MHz wide, the unlicensed bandwidth allocated to 60 GHz is 7 GHz wide – covering the entire band from 57-64 GHz in the US (and is the same or similar worldwide). This massive increase in bandwidth translates into much higher capacity channels that allow for the transmission of fully uncompressed high definition video at the standard rate of 1.485 Gbps. Therefore, there is no need to impact video quality or system latency by compressing the video stream.

Our line of sight wireless links and solutions will save your money and give you the best bandwidth and reliability.