Compact, yet multi-functional.
Comes with a MultiViewer display function for professional HD production.

This is a half-rack size digital video switcher. In spite of its compact size, it features four SDI inputs, one DVI-D input, two SDI outputs, and one DVI-D output. A MultiViewer Display function lets you split the screen in eight different ways, and a Frame Synchronizer ensures easy, high-quality switching. By combining the AW-HS50 with the AW-HE50S HD Integrated Camera and AW-RP50 Remote Camera Controller, a space-saving, low-cost HD image production system can be configured for business use.

The AW-HS50 supports a variety of HD/SD formats, including 1080/24PsF, as standard. System frequency is 59.94 Hz/50 Hz/24 Hz switchable. This makes it ideal for digital cinema production and worldwide operation.

Frame Synchronizers on All Inputs

A Frame Synchronizer is embedded in all inputs. This enables asynchronous video signals to be switched without glitches.

The AW-HS50 is equipped with an SD/HD up-converter function for two inputs (SDI IN 3/SDI IN 4), and a dot by dot function that can be used for P-in-P display of HD images from SD footage without degradation. A video processing function with brightness, pedestal level, saturation, and color phase correction is also provided for four inputs.

Five crosspoint buttons in each A bus and B bus (for a maximum of 10 with the Shift function), a Cut button, a P-in-P button, a Key button and an FTB button allow direct control with this simple panel layout. A slide lever also provides easy control of transitions, P-in-P, and Key Fade In/Out. Various functions can also be assigned to two user buttons (for a maximum of four with the Shift function) for one-touch operation.

Up to 10 Split-Screen, MultiViewer Display 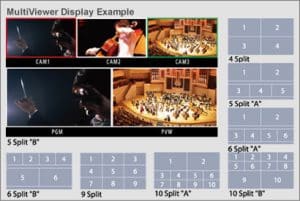 The built-in MultiViewer Display function can simultaneously display various images, including program (PGM), preview (PVW) and input signals, on a single monitor. The screen may be split into 4, 5a/5b, 6a/6b, 9 and 10a/10b sections.

The OSD increases operating ease by outputting setting menus to a monitor screen. (SDI OUT 2 or DVI OUT only) 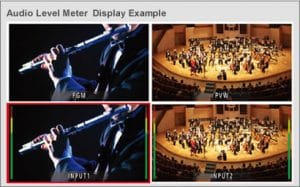 This function displays the level of the embedded audio signals (group 1/1ch, 2ch) superimposed on the SDI input signal.

Linking with a Remote Camera Controller

By linking the AW-HS50 to the optional AW-RP50 Remote Camera Controller with an IP connection* over a network, a number of remote operations become possible, such as operating the optional AW-HE50S or AW-HE120 HD Integrated Camera. The AW-HS50 and AW-RP50 have a unified design and half-rack size, so they can be mounted side by side in a single rack.

* Only one AW-RP50 can be connected to the switcher via an IP connection. And connection is not possible with a public network. 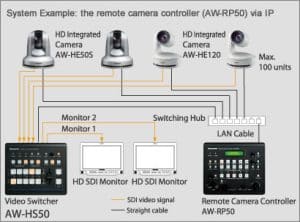 Be the first to review “AW-HS50” Cancel reply