Thor HD-SDI to 8VSB series encoder modulator chassis are designed for corporations or video professionals that need to modulate HD video onto RF carriers compatible with North American ATSC tuners.  Over the air television systems in this region use a unique modulation protocol known as 8 level Vestigial Side Band (8VSB) modulation.  While most tuners and television sets sold in North America support demodulation of QAM-256 under ITU-T J.83B in addition to ATSC’s 8VSB signal, most can only tune to one type of signal at a time.  This creates a problem for system integrators who want to inject their own programing into broadband lineups containing channels from a master antenna system.  Thor offers 8VSB modulators for use in any application where ATSC signals must be combined with locally modulated content.

Thor encoder modulators are available for all major world television systems.  Television systems in North America are based on the Advanced Television Systems Committee (ATSC) standard that employs 8 level Vestigial Side Band (8VSB) modulation.  This type of RF is unique to the North American Market as well as the ATSC Program & System Specific Information PSIP tables.  Thor modulators that include VSB in the model number indicate they have the firmware necessary for ATSC 8VSB modulation.  These modulators will output RF carriers with program streams designed to be received by North American set top boxes and tuners.  All PSIP and electronic program PID tables can be set and edited from the modulators control page, and custom PID values can be configured for specific systems.  For full compatibility with all STBs such as Motorola or Scientific Atlanta systems that choose to only accept Intel’s Dolby AC/3 audio codec, most Thor modulators offer this as an additional option.  ATSC provides up to 19 Mbps of programing, so it carries much less data than QAM or DVB-T; however it can be used with longer coax runs.  This modulation protocol is only necessary when the application requires combining locally modulated channels with an Off Air lineup picked up from an antenna.

Unit model numbers that include “LL” indicate that model includes Thor’s low latency encoding option.  This new feature reduces the time delay between video input and encoded program output by more than 10 times.  Standard model encoder modulator chassis systems typically have an encoding latency of 700-1200 ms depending on encoding parameters and output configurations.  For many applications, adding approximately 1 second latency doesn’t make a difference.  For other applications, such as live events; 1 second delay is very noticeable and prevents modulation from being used in distribution systems.  The solution to live video broadcast applications is the Low Latency upgrade option for the encoders.  IPLL models typically have an encoding latency of approximately 70-110ms, making them suitable for distribution of live video events.  Contact a Thor sales representative today for more information on encoding latency.

Chassis systems with custom encoder card configurations are available for supporting multiple input video formats in a single chassis.  Thor SDI-VSB-IP line of encoder modulators are designed for high quality distribution of broadcast quality video over coax cable.  These systems are available in many configurations for a wide range of applications.  This page covers models for a specific input video type combined with a modulator chassis programed for a specific output format.  It is important to note that encoder card types can usually be combined with encoder cards for other video types.  For custom model configurations please contact Thor directly for pricing and availability.  While most firmware for Thor modulator chassis is inter-compatible; not all hardware will work with all software.  Thor representatives are available for free design and consultation service. 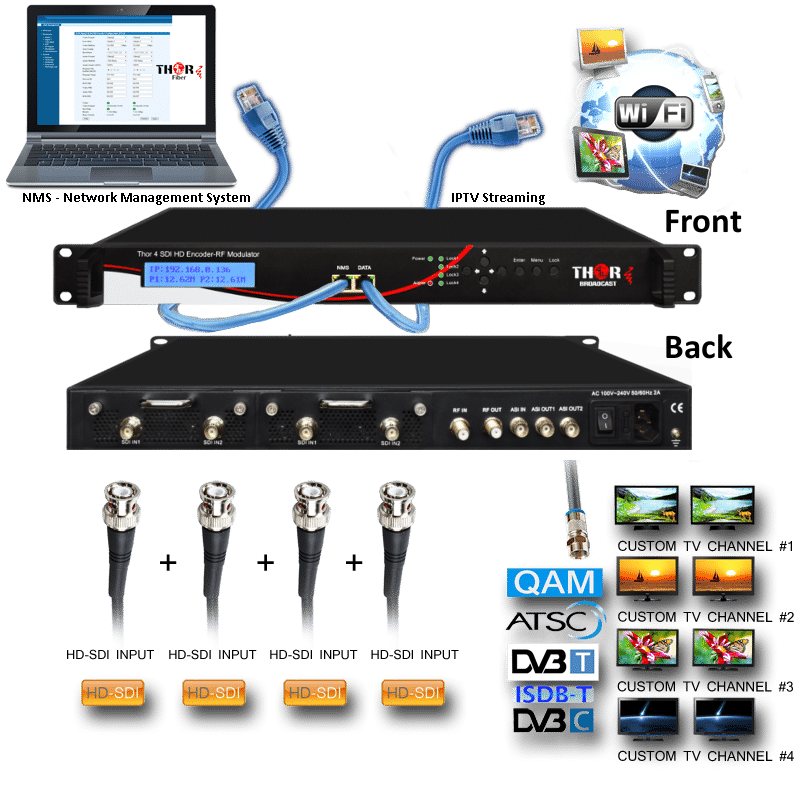